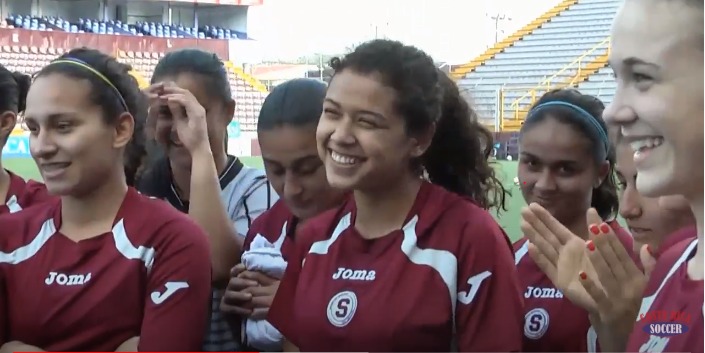 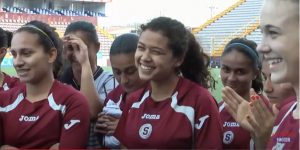 Some say fútbol is Costa Rica’s national religion. If so, then Raquel “Rocky” Rodríguez is one of its patron saints.

Rocky has represented her country in three World Cups, with the under 17, under 20 and adult teams. She has played in 70 international matches with the national soccer team, scoring 40 goals.

She was the first female Costa Rican player to score in both the youth World Cup (New Zealand 2008) and the adult World Cup (Canada 2015). In the latter she scored the adult team’s first World Cup goal, playing against Spain.

As a college student in the U.S., she led the Penn State Nittany Lions to their first national title in 2015, scoring the only goal in a 1-0 win over Duke University in the final. She ended her college career at Penn State with 23 goals and 28 assists.

Her achievements at the college level thrust her into a national spotlight. She was recognized as the top player in U.S. women’s college soccer by winning the 2015 MAC Hermann Trophy, and she became the No. 2 draft pick of the National Women’s Soccer League (NWSL).

Rocky went on to play professionally for New Jersey’s Sky Blue FC for four years. She was named NWSL Rookie of the Year in 2016, and she helped Sky Blue become two-time champion.

In 2020 she was acquired by the Portland Thorns FC, one of the top U.S. women’s teams. With all soccer currently on hold because of the coronavirus pandemic, she is still waiting to play her first match with Portland.

We at Costa Rica Soccer Tours remember Rocky well, as she used to play against the North American teams we have hosted in this country for years. She was one of our fiercest opponents, and we are so proud of what she has accomplished since those days.

Rocky grew up in San José, where her father was a professional player and a coach. She talks about her early interest in soccer on a video posted on her Instagram page, saying her friends used to play in the streets, using rocks as goalposts.

“My best friends were mainly boys, because they were the ones that played soccer,” she says in an interview. “Whenever a car came, you yelled ‘Carro!’”

Rocky’s father, Sivianni Rodríguez, says on this video that women’s soccer was frowned upon in Costa Rica at the time. “In fact, there was no support,” he says. “It wasn’t normal. And parents, families prohibited women from playing soccer.”

Rocky tears up as she recalls the challenges of those days.

“I would cry all the time in anger or frustration,” she says. “I just couldn’t understand why we didn’t have the same resources as the men.…

“We would go out, train just like they did, and they had their locker rooms, and we would have to go to the public bathroom to change. I wanted to play soccer so bad that at a certain time I was like, well, I wish I was a boy, then.”

But her father supported her all the way. “I saw that she was very disciplined, very coordinated, and she really liked it,” he said.

“He always says, I just saw the talent that you had, I didn’t care if you were a girl or a boy,” Rocky says.

Rocky says on her Facebook page that when she was just 8 years old, she wrote down three goals on a piece of paper: to play for the Costa Rican national team, to get a scholarship to play college ball in the United States, and to become a professional soccer player.

She would go on to check off all these goals in spades.

“I always make it a point to remember how hard it was to make it to the national team, to keep that passion alive in me because if you take things for granted, you lose what makes it special,” she says.

Rocky, now 26, majored in recreation, park and tourism management as her major at Penn State, graduating with an impressive 3.78 GPA. She plans to one day pursue a career in sports administration.

Rocky is both a fierce competitor and a really sweet person, with an incandescent smile and a ready laugh. She has organized girls’ soccer clinics in Costa Rica, and she laughs at how some of the girls are starstruck, asking for an autograph, a photo, a hug.

“It takes passionate people to do things that aren’t easy,” she says. “I’m so grateful to have been part of that group of players that have been changing, little by little, the story of women’s soccer.”

Raquel Rodriguez – Interview in Costa Rica with We Live Soccer