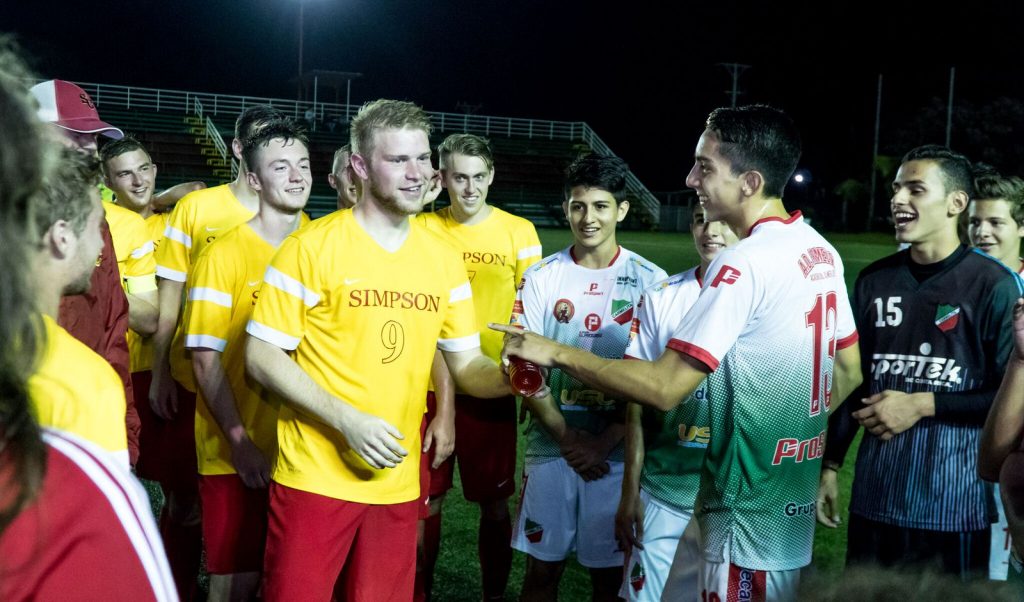 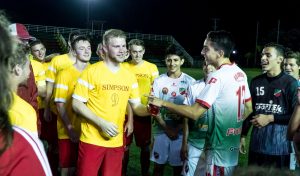 With a name like “Storm,” it’s no surprise that the men’s soccer team of Simpson College in Indianola, Iowa, likes to play in the rain. So they came to the perfect place.

Costa Rica Soccer Tours was delighted to host the Simpson Storm for a 9-day visit to Puravidaville, where they braved whitewater rapids, waterfall visits, catamaran cruises, tough soccer rivals and even tougher storms.

The team trained at an elite fútbol facility in Turrucares and visited the stunning National Stadium in San José. Right next to the stadium is La Sabana Park, the Costa Rican version of Central Park.

Then, the boys played their first friendly match where they defeated a local team called Carmelita under rainy skies.

“The pitch was wet and that played right into our style,” wrote senior Jake Potratz. (By the way, the coach and players took turns every day updating the blog on their athletics website, which is well-written and occasionally hilarious!) You can read their blog here.

The emotional highlight of the trip came with a visit to El Manantial, a drop-in center for children living in poverty.

“The visit to the shelter started off with the kids, who were all 2 to 5 years old, charging at all of us to give us a huge welcome hug,” wrote senior Connor Robson. “From there on out, it was pure chaos. The kids had each one of us chasing after them in what seemed to be a never-ending game of tag where we were always it.”

Our tour guide noted: “For about an hour everyone ran around nonstop, jumped, played soccer, basketball, tag, and even managed to do a conga line.”

Welcome to the Jungle

The team moved on to Arenal, the adventure tourism capital of Costa Rica, dominated by a majestic volcano and renowned for its hot springs.

After a night of soaking in hot water, they got doused in cold the next day with a whitewater rafting adventure on the Sarapiquí River. Navigating Class 3 and 4 rapids, the team was impressed with the dense vegetation on all sides. Lunch was the famous “casado” with chicken and green bananas. Delicious!

The same night, Simpson played its second friendly match against an experienced local team called San Carlos, and endured something of a schooling— more or less the reverse of its experience with Carmelita.

The next day, Coach Isaacson was accused of “incorporating disguised fitness” with a visit to a spectacular local waterfall named La Fortuna waterfall, which is accessible by 500 easy downhill steps carved into a mountain. The only problem is, after enjoying the waterfall, you have to climb the 500 steps uphill.

The next stop was a beachfront hotel on Guanacaste’s “Gold Coast,” named for its string of gleaming beaches. Sunsets and dancing ensued, followed in the morning by training and free time.

The team went on a catamaran cruise, and watched whales and turtles swim around. The boys also enjoyed doing flips off the boat. Bahia de los Piradas was the stop for dives, snorkeling and paddle boarding. It was the perfect day, and one of the boy’s first time in the ocean!

The final friendly match was played on Day 7, against Liberia, and it had everything you could ever want in a soccer game— closely matched rivals and cloudy but rainless skies.

“This was a great experience to play against different teams with a very different style of play than we are used to seeing in the U.S.,” said player Mason Madren.

“The beautiful game brings people together from everywhere and we felt welcomed by each host team,” said Coach Isaacson.

He described the playing experience as “enjoyable, competitive, and beneficial to our growth as a team.”

Want to give your team the adventure of a lifetime? Check our tour options here!