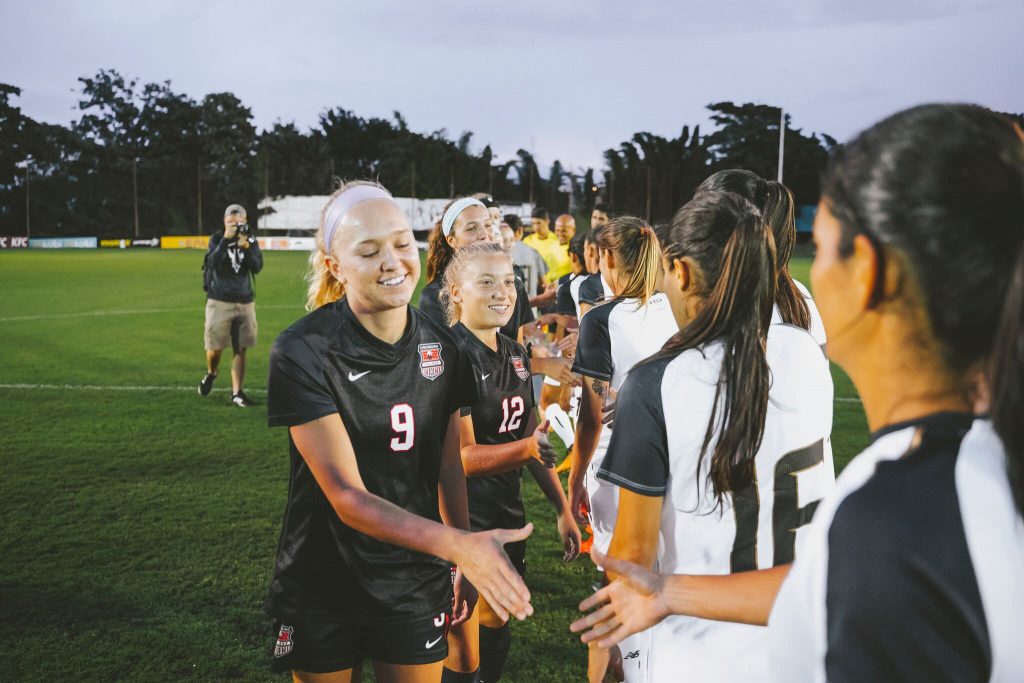 The women’s soccer team from Virginia’s University of Lynchburg recently arrived in Costa Rica — for their fifth visit! — and had the thrilling opportunity to play the national team, facing Costa Rica’s best players.

After a noon arrival at the airport, the women had lunch, checked into their hotel and spent the afternoon training, noting that it was breezy and cool — a welcome change from the recent heat wave back home. The next morning’s training was much warmer, and the women began to get a feel for Costa Rica’s many microclimates.

Getting to know Costa Rica 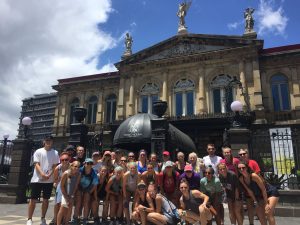 The team did a guided walking tour of San José, visiting its historic landmarks, and really enjoyed the visit to a souvenir market. After lunch, they geared up for their first friendly match against the Costa Rican team, Moravia, an intensely competitive match that ended in a 1-1 tie.

Day 3 started with a visit to a public school in an underprivileged area of San José, where the team organized a soccer clinic for the kids. The children were surprised and delighted when Lynchburg gave each of them a soccer ball. The women later said it really touched their hearts to see these children laughing and having fun and so excited about their new soccer balls.

“The best part of this,” said player Emily Santana, “was just being able to see their face light up by seeing a soccer ball.”

The team also collected donated school supplies for the children prior to their trip. The school was very grateful for their love and kindness. Administrator Joe Hutzler said the highlight for him was “the pure joy of the kids enjoying their time and receiving those balls and school supplies — the things we take for granted at home.”

After some rainy training and a visit to Costa Rica’s amazing National Stadium, Lynchburg was privileged to play against the national team, “La Selección,”at the Costa Rican Soccer Federation facilities where they toured around before the match. La Sele prevailed in a fast, aggressive and muscular game, but the Lynchburg coaches said they were happy with the outcome and learned a lot.

“Great experience playing the top-level team in Costa Rica, said assistant coach Natalie Deacon. “They were absolutely fantastic and it was a privilege to be on the same field as them.”

“Unequal to any game I’ve ever played!” said Abigael Germeroth. “So cool I get to say I’ve played a national team!”

By Day 5 it was time for some team bonding (plus a little fear factor) with a whitewater expedition down the Sarapiquí River. Half the group of players and coaches was very excited and half were pretty nervous. At least one of the rafts flipped — that’s part of the fun — but everyone was OK. Afterwards, during lunch, all were amazed when a troop of howler monkeys came right up next to them. Later, they soothed their muscles in the rejuvenating hot springs for which this region is famous for.

Before leaving this region the next day, the team took advantage of one more adrenaline-inducing adventure- ziplining through the rainforest canopy. And then it was off to the beach — the third leg of every trip hosted by Costa Rican Soccer Tours. After check-in at a new hotel, they went straight to the beach, where they went jogging in the sand and then plunged into the ocean to enjoy the sunset.

In the morning the team took some time off to go to the beach or the pool, shop for souvenirs or have their hair braided. In the afternoon they played their third match, defeating Liberia for a satisfying win. 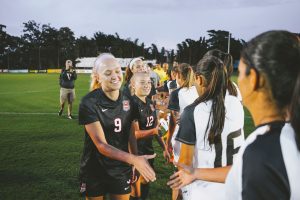 For their last day in Costa Rica, many of the women were feeling emotional, some commenting that they wanted to stay and live here. The highlight of the day was a sunset cruise on a catamaran. The women had really become close on this trip, and they caught some rays on top of the boat, laughing and joking. There was also snorkeling (with starfish and an octopus) and some acrobatic jumps from the boat into the water. Heading back to land, everyone was mesmerized by the stunning sunset.

A farewell dinner wrapped up the trip, and a few tears were shed during an emotional goodbye. Coach Todd said some final words about how happy he was with the tour and how thankful he is to Costa Rica Soccer Tours for always being so precise and caring, and for always managing to surprise the team, despite its repeat visits.

Asked what they will take home from this experience, Madalyn Amos said, “An appreciation for another beautiful part of the world, and so much respect for a new culture!”

“Never take anything for granted and stop and enjoy the scenery, because this was a once in a lifetime trip!” said Santana.