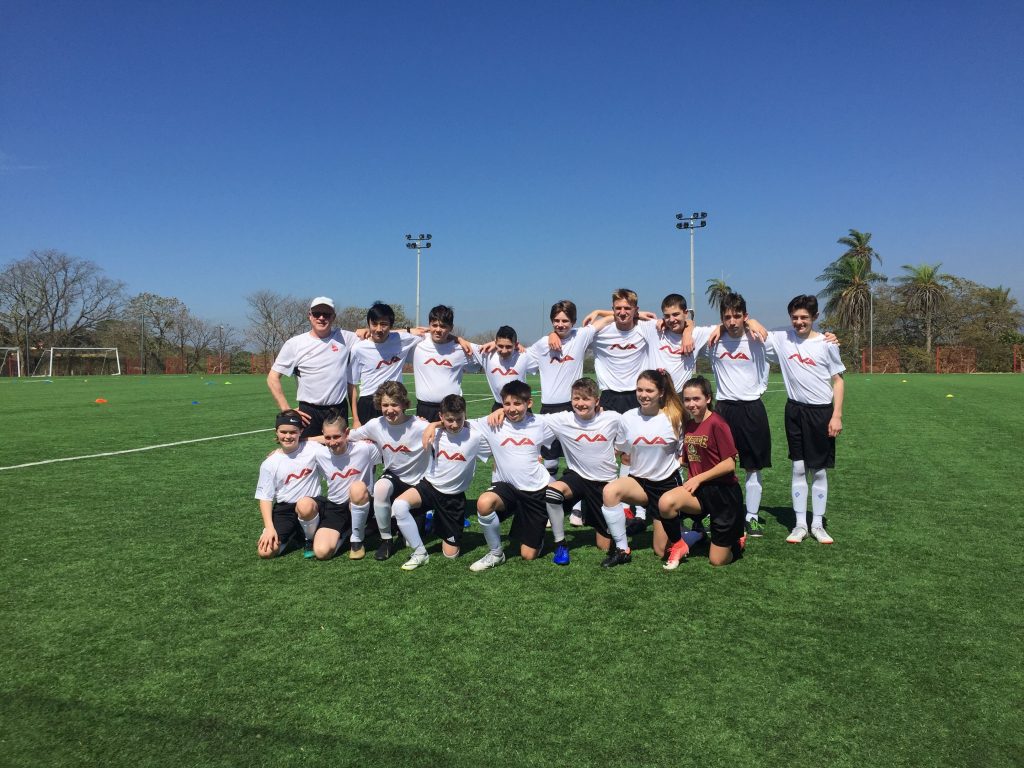 On our first day in Costa Rica, Canada’s Newbridge Academy Soccer Team woke up bright and early at 5:00 am from sheer excitement. They were so ready to get a head start on their first international tour that they got everyone else up as well!

After a delicious breakfast, the team geared up for their first training session with professional Costa Rican coaches. One of the trainers took the team through a warm up while the other helped with three different tactic techniques.

Despite the heat, they all did a great job. Akihiro Enomoto, one of the players, cheered, “It was the one of the great experiences I had on this trip!”

After the excitement died down, the players got to rest a little bit before starting the walking tour of San Jose. During the city tour we made sure to stock up on tasty snacks to fuel the team for their upcoming game. One of the teammates, Jacob, had a birthday so we also snuck in a LDA shirt for him, by request of his father.

That night the team had their first friendly match against Liga Deportiva Alajuelense. The team was nervous about playing a foreign rival, but was also excited to get their first game in Costa Rica started. LDA proved to be a challenging rival, but Newbridge got stronger by the minute. It was a great bonding experience for the team and the coach was excited to implement what they learned in the next match! 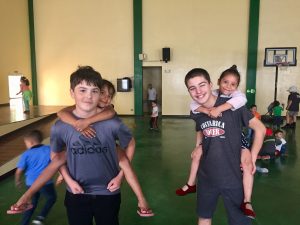 Day 3 kicked off with the group community service project, but not before the students filled up on Gallo Pinto; They were loving the different flavors of Costa Rica!

When we arrived to Los Guido, the little kids were so excited to meet the Newbridge team.

The entire time we were there they wouldn’t stop playing, laughing and hugging each other!

“Their smiles, energy and love that they showed all of us. Language means nothing to kids – we are all able to connect.” -Graham Chandler (Coach)

On the way back to the hotel, the bus driver spotted a couple monkeys so we made a brief stop so that the team could enjoy seeing them in their natural habitat. The day ended on a positive note when the entire crew sang happy birthday to Jacob! He was surprised and extremely touched.

Day 4 was all about their second friendly match. The weather was really hot but carried enough wind to cool down the players. We were playing Liberia, a challenging opponent.

At the end of the game, the coach gathered the team around and asked them what they had thought about the match. They collectively agreed that they liked the game a lot because they felt more comfortable about themselves, and as a group, were gaining more confidence. It was a wonderful moment for the team!

The Coach took notes on the techniques Liberia used so that he could incorporate it into the team’s strategy.

“Tremendously positive experience, quality of team and competition, facilities, officiating plus game experience. Shows us how much we have to do in order to raise our own standards.” -Graham Chandler (Coach)

The day ended with a gorgeous view of the sunset in the stadium that all the parents swooned over.

Sailing Next To Dolphins 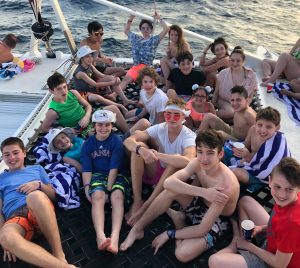 After a busy trip, we finally had a day to unwind! Coach Graham got the players together for a riveting game of beach volleyball instead of a formal training session. The parents got into the game as much as the kids did and it served for a fun and active training alternative.

Then came the highly anticipated Catamaran Tour! It’s a memorable trip where we enjoy ocean breezes and coastline scenery on a beautiful cruise while sipping delicious tropical drinks and eating delicious snacks.

We enjoyed the warm water by snorkeling and swimming. Both parents and kids even did back flips! The highlight ended up being when we saw dolphins swimming right next to the boat. It was wonderful to bond as an entire group, and not just as a team.

On Day 6 we went to the team’s first Costa Rican professional game. We got to go to the stadium to watch Liga Deportiva Alajuelense vs Saprissa, a really important and exciting game. Everyone loved experiencing the local soccer culture. The team said that in Canada they may have nicer stadiums but the energy does not compare. Costa Ricans love their soccer!

“I loved how loud the fans were. The atmosphere was amazing.” -Nikolas Nicoletopoulos (Player)

The next day we got to enjoy the tropical side of Costa Rica at the La Paz Waterfall Gardens. First, we saw some local wildlife; The jaguars were by far everyone’s favorite. We then took the safe hiking trails to the five different waterfalls. A bonus was seeing the local coffee plantations, ferns and even ripe strawberries.

We then went straight to their friendly match against Carmelita. The kids were really excited and loved the stadium. When the game started, everyone could see the team play with a newfound confidence as they completed some great passes. The kids were clearly growing into a closer team with better communication and teamwork. All of those notes were finally paying off!

Standing On An Active Volcano

The last day kicked off with a visit to the Irazú Volcano. We all loved watching the beautiful greenery and mountains pass by on our drive. The team was excited to be 11,260 feet above sea level, on the highest active volcano in Costa Rica. 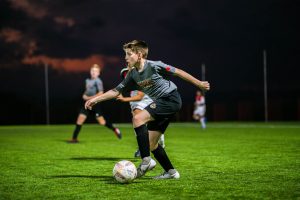 Newbridge’s last game was against Club Sport Herediano. Although it was a very competitive match, the team kept pushing until the very end.

It was a very supportive environment and the two teams even had a chance to get to know each other. Coach Graham was very proud of the team for never quitting.

Our last day ended with an emotional goodbye dinner since everyone had grown very close. All the kids got up when we shared our speeches and made sure to hug us one by one. We hope they will be taking this trip again in the future!