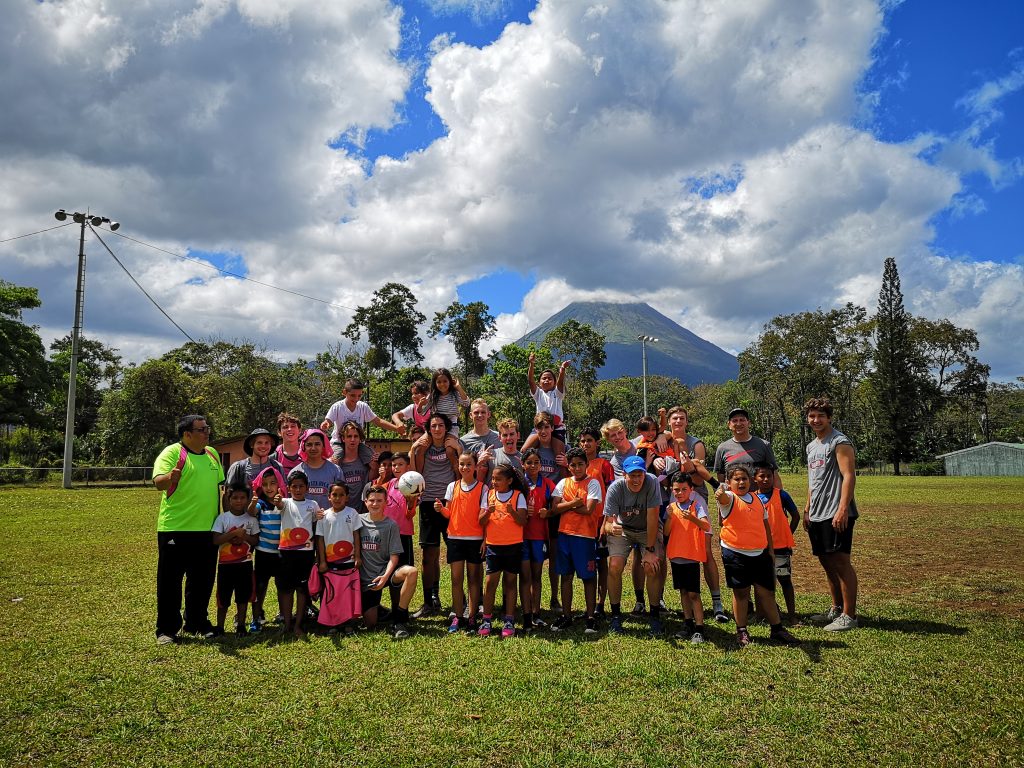 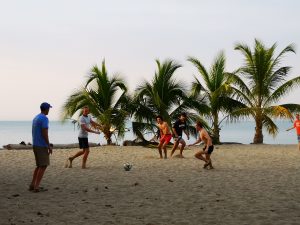 After a long flight, Utah’s USA Boys U17 soccer team landed in Costa Rica with big smiles and hungry bellies!

We made sure to give them a recharging meal so that they could unwind while receiving their Orientation Presentation and become more comfortable.

After their first training session, it was time to eat again. They were treated to a local Costa Rican restaurant where they immediately got to get a taste of the local gastronomy, music, and even some dancing! This fun night was the perfect break for the team before gearing up for their first full day in Costa Rica.

Bonding With The Kids

At 8:30 the next morning, the boys arrived at the León XIII school supplied with water rockets, balls, wood planes, and a magnificent magic show for the kids. After playing for an hour, the students and kids were divided into two groups. The first group created a beautiful tire garden while the second group painted it. For the last ten minutes at the school, the team picked up garbage around the area to leave the place spotless!

“The children showed so much love to my players, we thought we were serving, but the kids gave us so much more than that” – Jerry Johnson (Coach)

When planning out the itinerary, Day 3 was made as a day of true immersion and exploration. The team traveled to the rainforest for a ziplining adventure to get their adrenaline pumping. During the drive, the boys got to experience the changes in the different microclimates of Costa Rica. The bright sun turned to fog, that turned to rain, all within the Braulio Carrillo National Park.

After dinner that night, the team was very excited to head over to the Clásico to watch an intense professional game between Saprissa and Liga Deportiva Alajuelense. To fully experience Costa Rican soccer culture the boys got into the songs, yelling, and, of course, the churros.

Day 4 kicked off with the team visiting a nearby Mormon church where they were part of the ceremony and prayers. The team was very thankful for the church’s hospitality. Then, the team journeyed to San José to La Fortuna de San Carlos, where they arrived at the hotel and got ready to visit the amazing hot springs. 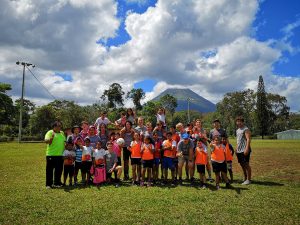 Day 5 held one of the most memorable moments for the Utah team. In the morning the team had a Soccer Clinic with kids from the La Guardia community. They spend two hours with kids, ages six to twelve, teaching them soccer techniques, shooting, and dribbling.

The team created a championship with simultaneous games for some friendly competition. It allowed the students to truly bond with the kids as the tournament developed.

After a sad goodbye, the team took a much needed rest after the activity-filled five days. Feeling recharged, the Utah boys arrived at a renovated stadium to play against San Carlos. This game was better for Utah, with clear improvement from the last game.

During the match, the possession was very constant on Utah’s part. The game ended with a shot by Kellen Bybee that almost became the team’s first goal in Costa Rica, but alas, was blocked. Nevertheless, the team and coach were motivated by their growth from the last game.

After a three hour trip from La Fortuna to Punta Leona in Puntarenas, the team checked in at the hotel where they were greeted with the joyous news of a day off. The Utah team ate well, enjoyed pool time, and even partook in karaoke night. The next day was also laid back as the boys traveled to downtown Jacó, got some food, bought souvenirs, and enjoyed the town and beach.

Ending On A High Note

On their last day in Costa Rica, the Utah team got to indulge in a historical tour before taking on their final game. Determined to win, the boys took some downtime to concentrate on preparation for their match against Escazu.

The game ended 2-1! Although the team didn’t win, the growth throughout the trip was satisfying to all. Justin Christensen was a star player in this game, providing the team with a great display of perseverance. Even though his first goal was a technical error, he didn’t give up and blocked very important shots. Utah’s first goal in Costa Rica was completed by Tyler Goold, and the match ended five minutes later.

It was a thrilling last day for the boys filled with culture, education, and soccer! The perfect send off before returning home to Utah.