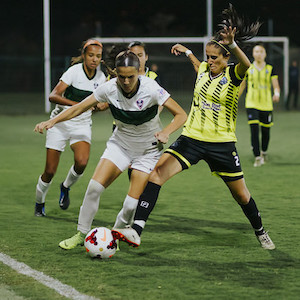 For the third match of the tournament, the girls had to work through nerves and their accumulated exhaustion. Regardless, their willpower shined on the field and all the players did their best. The four regions displayed exceptional game play and we are excited to see what the final day of the tournament holds! 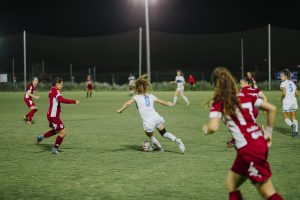 The third match for the East Region took place against the strong team of Saprissa. The game started with Region 1 dragging the ball and creating spaces to attack. Soon enough, they had their first opportunity to shoot, but unfortunately, Saprissa’s keeper was able to repel it.

There was a tough fight going on in the midfield to gain control and the match seemed to be even during the first ten minutes. A couple of miscommunications in the ODP girls’ defense propitiated opportunities for Saprissa, but they did not take advantage of them. During minute 13, Jailene DeJesus appeared dribbling as fast as she could from the right wing and threw a great crossed pass in between the defensive line of Saprissa. It was Erin Flurey who then entered diagonally from the left side, entered the box, and pushed the ball inside the net with great finesse.

Saprissa was able to tie only five minutes later, but this did not bring the girls down. Jaya Daniel, East’s goalkeeper, had to appear a couple of times to deny Saprissa another goal. The final score for the first half was a 1-1 tie. During minute 41 (second half), Saprissa finally found a way to break the net and scored their second goal of the night. The Costa Rican team managed midfield and the ball possession, pushing East to play only by counterattacking several times.

The match was very tense and people could sense the players’ boiling blood. By the end of the second half, Saprissa was able to score the third goal and the match came to an end. Erin Flurey was chosen as the Most Valuable Player (MVP) of the match and the team went back to the hotel to recover.

For Game 3, Midwest’s opponent was the brave team of CODEA. There was a little rain and a lot of wind, but both teams were unbothered and focused on their passion for the game. The first eight minutes were dominated by CODEA, but Midwest worked hard to keep the game even. It wasn’t until minute 21 that one of CODEA’s players broke the defense and was able to score. The score was now 0-1, in favor of the Costa Rican team.

CODEA tried to keep control over the midfield so they created several effective combinations and wall passes to break the Region ́s defense, but Midwest had a fierce and tight tackling strategy with outlet passes. One of those was created by Brianna McNab, who passed a great ball to Sophie Wilson, who shot the ball right into the net.

After a short five minutes, clearing from the ODP girls’ keeper came short and CODEA was able to score a second point. At that point, the Midwest girls stepped back a bit and tried to solidify their game plan. During the 15-minute break in between halves, the coaches showed support to the team and motivated the girls to play a better second half.

CODEA was able to score twice during the second stanza and Midwest could not tie the game before it came to an end. The final score was 1-3 in favor of CODEA. The MVP for the ODP girls tonight was Brooke Miller. 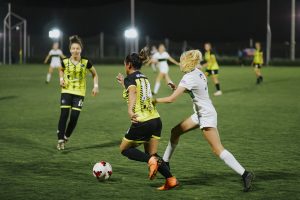 For their third match in the tournament, the Southern Region was ready to play against Moravia. Excitement, anxiety, and exhaustion were all over the field, but none of the girls were going to let their body control their hearts.

During the first half, South tried to score first but it wasn’t until a penalty kick (18’) was called that Olivia Lebdaoui was able to score. The score was now 1-0. Moravia came back hard, determined to cut the celebration short and scored their first goal due to a direct shot from outside the box.

On the second half, a fearful fight to win the ball developed in the midfield. Since the middle of the field was so crowded, both teams decided to play more on the bands. It was enjoyable for the audience to see great ball trapping, shielding, and showing for square passes.

Moravia took advantage of a free kick close to the box and Daniela Coto was able to score an eye-catching goal. Some minutes later, Olivia Lebdaoui appeared running from the left side, entered the box carrying the ball in a great diagonal move, and tied the match with an outstanding goal.

In this 50-50 match, Moravia was able to score once again via corner kick and a good headshot from one of their forwards, but the ODP girls did not give up and pushed up the lines in order to find more goal opportunities. Unfortunately, they did not have enough time to recover and the final score was 2-3, declaring Moravia the winner.

The players from both teams were left emotionally and physically drained after a very tough match. During the MVP ceremony, both coaches highlighted the good technical and tactical skills of the teams. The most valuable player of the night was Shania Diaz. Good job girls, we still have one more match to go! 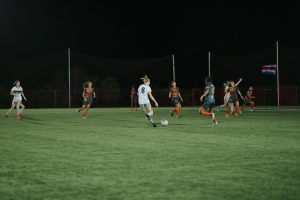 A very windy night welcomed the teams of West and DIMAS for their third match of the tournament. The skillful team from the States started pressing tight right from the start, as usual. DIMAS tried to press as well, but they were not able to move forward from the midfield; it seemed like the ODP girls were going to have the game under control.

While both teams were fighting over the midfield, Ashley Tonthat decided to run her heart out and cross the ball in a strong through pass, where Olivia Garcia quickly appeared coming from the side and shot with her left leg to score the first goal of the night. It seemed to be the beginning of a great game for the Western Region, but during minute 25, Hailey Povilus was unable to repel the ball and received in a penalty fault. DIMAS was ready to score their first goal of the night, but the West’s impressive keeper was able to keep the net blocked.

After this chance for DIMAS, West decided to push even harder. Olivia Garcia scored her second goal of the night after a great run through the throw line from one of her teammates. The Region was winning 2-0 when the referee blew the whistle to end the first half. The second half presented options for both teams, but none ended inside the net.

It wasn’t until minute 27 that DIMAS finally counterattacked, but again, solid goalkeeper Breanna Norris was there to deny DIMAS their goal. Right after this happened, West took advantage of a very good run from Kelly Bullock; she dribbled until she got into the goalmouth, won her one-on-one against DIMAS’ goaltender, and scored the final 3-0 in favor off the ODP girls. Great shot and great match!

Ashley Tonthat was chosen as the MVP for this game and both teams spent some time together when the game was over. Congratulations West, 3 matches won out of 3 so far. We cannot wait to see what you present tomorrow in the final match against Moravia!