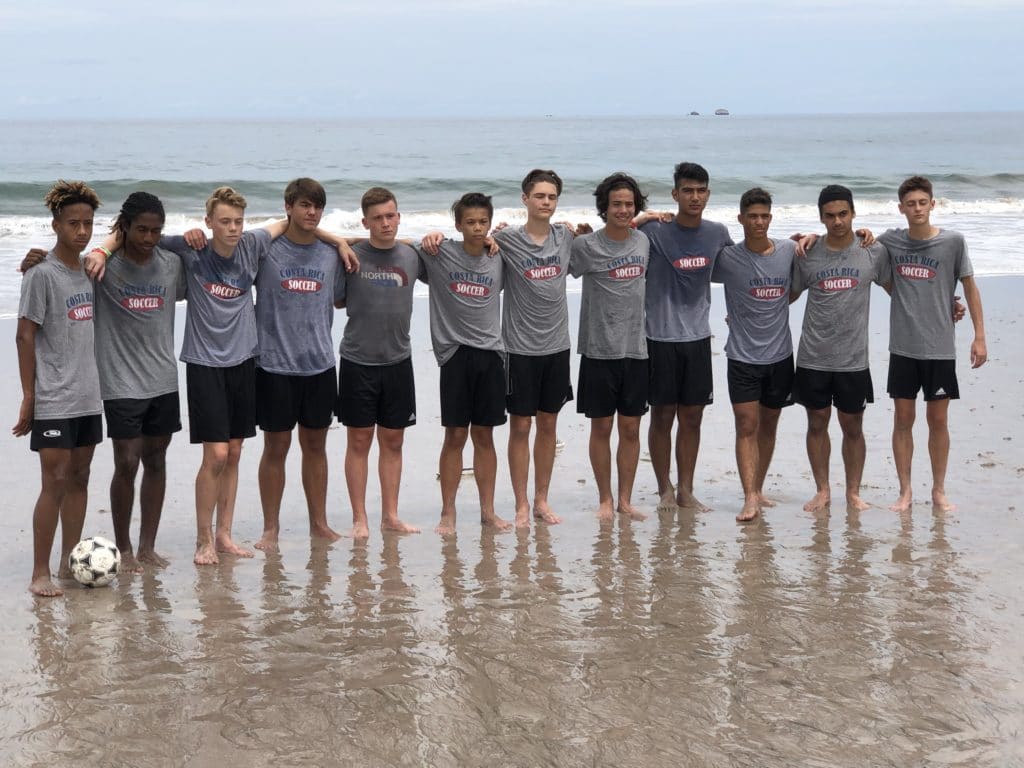 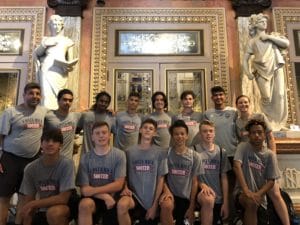 Costa Rica Soccer Tours was honored to host Rush Select, an unusual mix of boys’ and girls’ teams from various U.S. states and Canada, ages 14 and 15, for a barnstorming tour of Costa Rica — where they played a total of six friendly international matches.

Coach Chris Panayiotou said this was the first time these teams ever played together. Rush Select teams attend camp in Arizona in October or November and then are invited to attend other events in Arizona and internationally. They had one training session before taking on teams their age in Costa Rica, where they came for the cultural experience and to get a taste of fútbol in another country.

Rush arrived in San José on Monday, June 11, for a nine-day visit. They checked into their hotel and had dinner and an orientation on what to expect in the days ahead. One player got a “Happy Birthday” song and a chocolate cake.

On Tuesday morning, the girls went on a walking tour of San José while the boys did some training, and later in the morning the boys toured the city and the girls trained.

After lunch the boys played their first friendly match, against Carmelita in Alajuela, and won –with Shaydon Leiba of Toronto scoring three times in the first half.

At 6 p.m. the girls played their first friendly, against Dimas. It was a slow and calculated game, with a very attentive goalkeeper for Dimas, but toward the end of the second half Rush’s Addison Comer scored the only goal of the game, for a 1-0 victory. 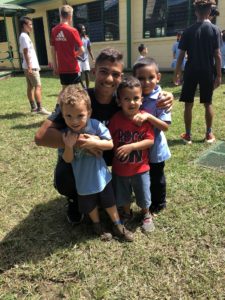 In the morning the teams visited community service projects — Manantial for the boys and Los Guidos for the girls — where underprivileged children are given food, care and education during the day. The coach said this visit, an experience to bond with children who had almost nothing, was one of the highlights of the trip.

Then it was off to the rainforest of Arenal for a check-in at their hotel and a different type of team training — “tennis soccer” (which, as you might expect, is like playing tennis with a soccer ball). They ended the day at Baldí Hot Springs, a big amusement park with multiple attractions involving water naturally heated by the magma of Arenal Volcano.

On Day 4 Rush visited the spectacular La Fortuna Waterfall in the morning and did some more training in the afternoon.

After an early wakeup Friday, Rush hit the road for the beach, rounding Lake Arenal (where they stopped for smoothies). The next stop was Hacienda Guachipelín, a hotel and adventure center near Liberia, where some students and parents went ziplining, while others headed to the beach in Flamingo and checked into a new hotel. Later the zipline group arrived, and all enjoyed a traditional Costa Rican dinner.

On Saturday the Rush girls played a game against Liberia that tour guide Stephanny described as “pretty intense and exciting.” The skies started out cloudy, but then the sun came out. The Rush girls dominated, benefiting from an own goal in the first half, scoring another in the second and winning 2-0.

The boys played next against Liberia, and Stephanny said the other team had a player (#20) who “was very technical and fast and gave Rush a lot of troubles,” but the Rush back line worked together to maintain a shutout. Even more amazing, Shaydon Leiba pulled off his second hat trick, scoring three times for a 3-0 win.

On Sunday Rush started the day (at 6 a.m.) watching Costa Rica play against Serbia in its World Cup opener in Russia. Rush did some training on the beach and then embarked on what some called “the best part of the trip” — a catamaran cruise on the Pacific Ocean ending in a gorgeous sunset.

On Monday, it was goodbye to the beach and back to San José for a farewell lunch, a quick nap and one last game. The boys played Escazú and the girls played Moravia.

For the boys, Stephanny said the game started out evenly matched, running 1-1 by the 60th minute, but in the last 30 minutes Rush killed it, scoring several times and taking away the win.

The girls drew first blood against Moravia, scoring two goals in the first half, but Moravia came back strong in the second, with two goals of its own, for a final 2-2 draw.

That night, because of their impending departure the next day, Stephanny said, “Some of them were actually crying.”

“This tour was an eye-opening experience of a lifetime,” said player Chloe Lynch. “It makes me want to come back.”