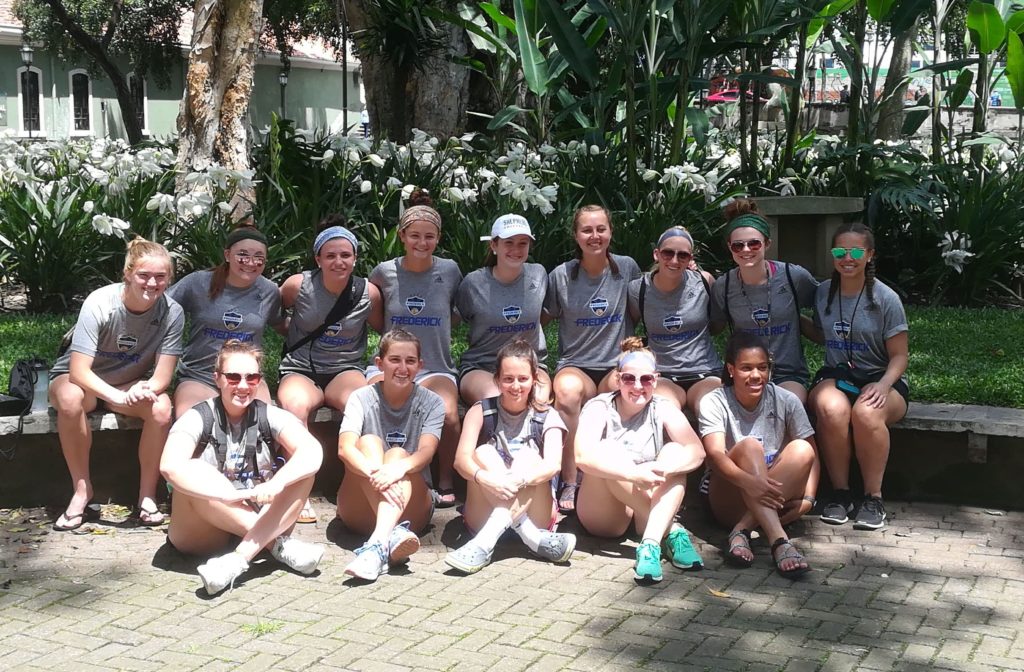 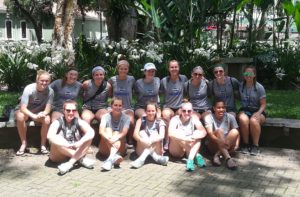 The under-19 Frederick girls’ soccer team from Maryland arrived in Costa Rica, checked into their hotel, had a great dinner at a wonderful traditional restaurant with a spectacular view of all of the San Jose and, yes, went to Walmart. Because you can’t have too many soccer socks.

On Wednesday, June 13, the girls went on a walking tour of downtown San José, visiting the major landmarks and the statue-filled parks. And after this workout for the calves, they had to get busy preparing for their first friendly match, at 6 p.m. in Rohrmoser against AD Moravia. Goalkeeper Amanda Kessler made some great saves, but Moravia was able to score twice for a 2-0 final in the game.

On Thursday the team visited a community service project called El Manantial, where children from impoverished homes are given a safe place to stay during the day, with food, education and moral support. “Everybody had a blast with the kids,” said tour guide Emilio Valverde.

Leaving San José behind, the team headed to the jungles of Arenal, Costa Rica’s unofficial adventure tourism capital. They checked into their hotel and did some training, and the weather cooperated by providing a clear view of the majestic, cone-shaped Arenal Volcano. At night they ventured to the hot springs and the girls had a great time with the relaxing springs and the scary waterslides.

More water was in store Friday, with a visit to the stunning, 230-foot La Fortuna Waterfall. And then there was more football, with a game against San Carlos.

“The match started very balanced, with both teams very aggressive and fast,” said Emilio. A long pass up the center reached Haley Barge, who scored the first goal with what he called “a very precise shot.” San Carlos came back after drawing a foul and kicking “an outstanding shot for the far pole that went right in the corner.” The final was 1-1.

The team had breakfast Friday watching upstart Iceland draw with storied Argentina by the same score, 1-1. And next, because nobody comes to Costa Rica without going to the beach, they went to the beach. Their route circled the gorgeous Laguna Arenal, the second-largest lake in Central America.

“The bus ride was very enjoyable, everybody looking for monkeys and sloths,” said Emilio. “We saw a lot of birds, including a jacamar and a howler monkey!”

After a smoothie break, the next stop was Liberia where the girls and their parents swallowed their fears and went ziplining. It takes a lot of rain to make a rainforest, so there was a bit of rain on this adventure. “Even so, we had a great time,” Emilio said. “All seemed very excited!”

The end of the road was Flamingo Beach and a stay at a hotel with one of the best oceanfront locations in all of Costa Rica. Dinner was Mexican food, which seemed to please coach Hector Uribe, whose family hails from Mexico.

Speaking of Mexico, everybody watched Sunday when this feisty underdog shocked defending champion Germany in a 1-0 shutout in Russia. As you can imagine, this pleased coach Hector, who let the girls choose their own activities for this day. They played some fútbol on the beach.

“I loved my experience with Costa Rica Soccer Tours and would recommend it to any and all soccer teams! It was the perfect way to finish the season.”

By Monday it was time to put on the soccer socks again for the last friendly, against Municipal Liberia.

“Liberia got things fired up with a long pass through the center for #10, Jimena Picón,” who scored the first goal, Emilio said. In the second period Frederick “had a very good chance to score, and the ball actually went in, but the refs called offside. It was a very tight call.”

But in the last of three 30-minute periods, Jessie Titus booted in what Emilio called “an impossible shot for the keeper,” and the game ended (again) 1-1.

Their last full day, Frederick went to the bustling burg of Tamarindo to see some new sights and do some shopping. Then they embarked on a catamaran sunset cruise, and for the second time on this trip the weather cooperated, with gorgeous, rain-free skies and sunny snorkeling.

“It was a great day and we had a ‘pura vida’ time,” Emilio said.