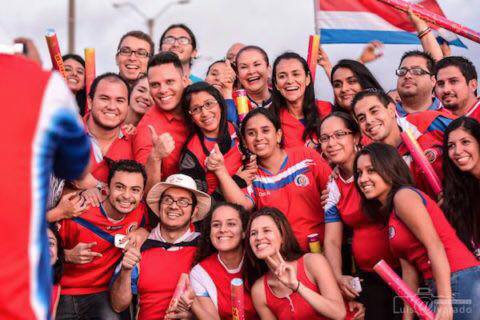 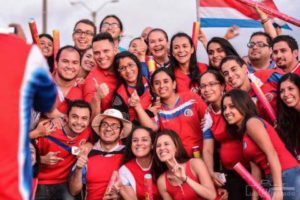 After Costa Rica’s win against the United States on August 31, all eyes are on the National Team tonight for the big game against Mexico.  If Costa Rica wins, the country will qualify directly for next year’s World Cup in Russia.  Thousands of Ticos and international visitors will be cheering on the local team in Costa Rica’s National Stadium tonight at 8 pm. A night out at a game is a treasured component of many a Costa Rican Soccer Tour, when schedules allow. But what does a first-time stadium-goer in Costa Rica need to know?

Soccer is king of the sports world in Costa Rica, and passions run high – so security is tight. Leave bags, water bottles and umbrellas at home; stick your wallet and phone in a secure pocket, and take a foldable poncho if it looks like rain. You may see people with cans asking for your coins before they’re confiscated at the gate, but most stadiums now allow you to keep your colones in your wallet.

I have to be honest: you’ll hear some colorful language inside the stadium, but there are a few chants that even the politest fan can join. Chime in for the National Anthem at the start, or at least the joyfully shouted final line, a sentiment we can all get behind: “¡Viva siempre el trabajo y la paz!” (“Long live hard work and peace!”). The Costa Rican version of the universal soccer warble, “Ooeeeooeeooeeooee, Ticos, Ticos” is, of course, ubiquitous.

You might also hear, to a distinctive drumbeat, “Vamos, vamos los Ticos, esta noche tenemos que ganar” (“Come on Ticos, we have to win tonight”).

Eager for more? Check out “Vamos Ticos” or “Agarrense de las Manos” for a taste of game night.

Each stadium is different, but as a general rule, the seating area at the ends of the field – referred to as Sol (Sun) because they have no roof – are where the most diehard fans hang out. At club games, sitting in this zone is kind of like attending a midnight showing of “The Rocky Horror Picture Show”: you should only do it if you know the moves, and when to duck. At National Team games, where fans are united around a common cause, this distinction does not apply.

I’ve attended World Cup qualifiers and small, local matches, lighthearted exhibitions and high-stakes games, victories and disheartening losses, the National Stadium and neighborhood fields, in blazing sun and pouring rain. Each one has been a blast. No matter what the teams on the field, the shared love of soccer of everyone in the stadium makes for a thrilling ride.

And if you’re lucky enough to be watching the National Team take the field – well, you’re in for a treat, because for just a couple of hours, you’ll be at the center of the Costa Rican universe. And that, my friends, is a great place to be.