Recruiting the best talent for your college soccer team is a major challenge for any coach.

It takes a lot of time and effort to scout players during the off-season while continuing with all of the rest of the responsibilities that go with the job. Finding the right balance of skill sets is never easy, but for those willing to look outside the typical recruiting circuits, highly skilled talent awaits.

Organizing soccer tours for U.S. and Canadian soccer teams in Costa Rica has made Costa Rica Soccer Tours a first-hand witness to the growth of both men’s and women’s soccer in Costa Rica.

The high level of English fluency, good quality education, and cultural passion for the sport in Costa Rica make it a true hotbed for highly talented players. Many of them value the opportunity to play soccer in the United States.

According to La Nación, a daily newspaper in Costa Rica, there are 71 Costa Ricans (both men and women) playing soccer in the U.S. right now, and 57 of them are also studying at U.S. universities. A December 1 article stated that Costa Rica exports more male soccer players than any other Central American country. So the question is-how do you find these players?

Early next year, a boys U-17 tournament and a girls U-15 tournament will be be held in Costa Rica. For each event, the U.S. Youth Soccer Olympic Development Program will take its four elite regional teams to compete against the best competition in Costa Rica.

This is an excellent opportunity for U.S. college coaches to travel down and watch both top U.S. and top Costa Rican soccer players at the same time.

This international exposure has resulted in numerous athletic scholarships for the local players. One recent success story is Raquel Rodriguez, who currently plays for Penn State University as well as the Costa Rica Women’s National Team.

Rodriguez played in the 2015 Women’s World Cup for Costa Rica, and scored a vital goal in the team’s 1-1 draw against Spain. She is also a senior and star forward for Penn State for which she scored the winning goal for their first NCAA Division I Championship last Sunday.

She has played for Penn State for four years after head coach, Erica Walsh, spotted her playing at a soccer event in Miami and recruited her for the team.

When asked what she thought about Costa Rican women’s and men’s soccer talent, Raquel said, “I think there is so much talent. Costa Ricans can bring vision and creativity to the soccer field. It is definitely another style of soccer that can work really well with the American style, which is very physical. Both styles complement each other.” 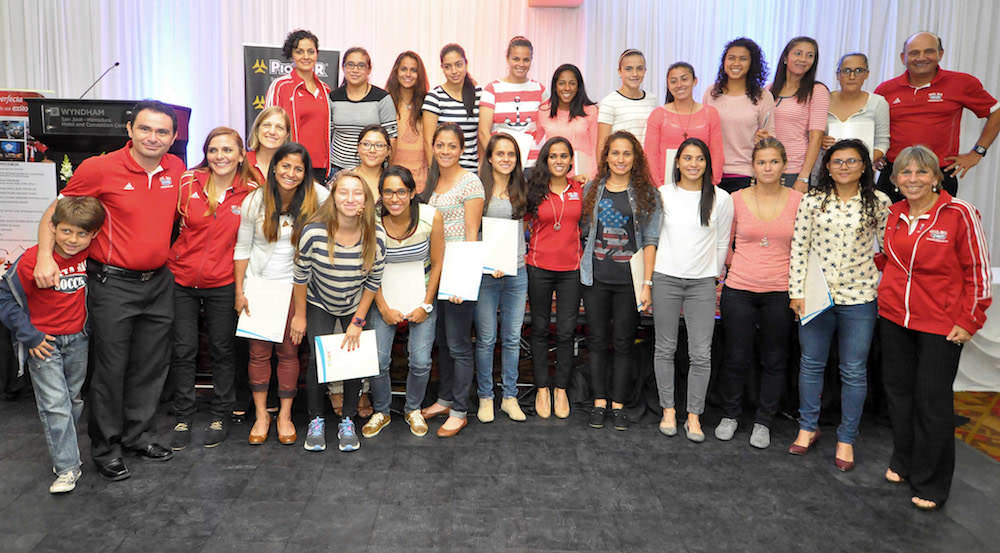 The National Team that represented Costa Rica in the 2015 FIFA Women’s World Cup.

College soccer recruiting can be a major challenge for coaches, and every opportunity to scout potential players should be taken. In traveling down to Costa Rica to see a different set of players competing at a very high level, you could well help add a valuable player to your squad and help discover the next great Costa Rican soccer players!